Welcome to the marvellous world of Open Face Chinese Poker!

Through these articles, we will discuss strategies, and we will do some fun exercises in order to see what would be the finest openings in all OFC variations (Pineapple, Progressive, Deuce-to-Seven and Turbo), using the same initial five cards, but applying them to all the different formats, to see the respective differences, and the best ways to position the cards in order to get a maximum profitability.

For this first example, we will receive the five following cards, assuming that we are first to act, thus having no information about the cards that our opponents will open up after us:

​We will now look at the four different games variations in OFC, using these same five cards, in order to see the changes in optimum openings from one format to another.

Let’s start with the classic “Pineapple” format, where the ultimate goal is to place at least a pair of Queens on top to go to Fantasyland: 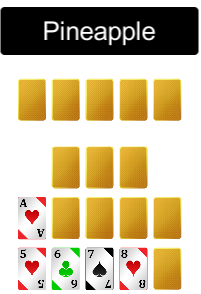 ​I would go here with the open-ended straight draw on the bottom, and the Ace in the middle, hoping to be able to complete my straight, and to make a pair of Aces in the middle that would beat my pair of Queens or pair of Kings to come.  Some players may be tempted by the Flush draw on the bottom, and the 6-7 in the middle, but I don’t think this would be the best opening here, without knowing how many Hearts my opponents will unfold after me, and mostly, sacrificing an Ace that is really precious on the middle line in this format!

Still holding the same initial five cards, let’s now see what would be the best play in “Progressive” format, where the fundamental goal is to place a pair of Aces or Kings on top, giving respectively 16 and 15 cards in Fantasyland: 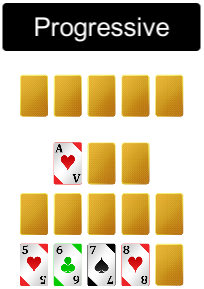 ​Here again, I would go with the same open-ended straight draw on the bottom, but I would choose to place my Ace on top, hoping to complete my straight, and to make a decent middle to cover my eventual pair of Aces or Kings on top.  Indeed, the Ace in the middle here would lose value, as even if it would be easier to turn it into a pair that would cover, for example, a pair of Queens on top, it would only give you 14 cards in Fantasyland, instead of the 16 cards promised for your pair of Aces.  This makes a huge difference, and looking at the long term in this format, you will have to take bigger risks to go to Fantasyland with 15 or 16 cards, because the points you will make with those Fantasylands will largely be worth all your failed attempts!

Let’s now see what would be the best opening with these same five cards in “Deuce-to-Seven” format, in which we can access Fantasyland by two different paths: Either by having the Nullo Max in the middle (23457), or by having a pair of Kings or better on the top line.  Keep in mind that accessing Fantasyland by both ways at the same time (Max Nullo AND pair of Kings or more on the same hand) will grant you one supplemental card, for a total of 15 cards instead of 14, and this will often make massive differences in the results, allowing you frequently to return in Fantasyland a second time! 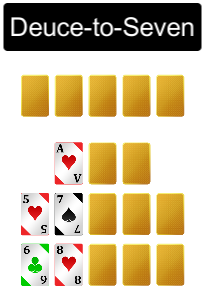 ​Taking all these considerations into account, and being first to act, I would choose here to keep all my doors open to go to Fantasyland either by the middle or the top, by placing my Ace on top, my 6 and 8 on the bottom, and my two Nullo Max cards (5 and 7) in the middle.  It is true that this particular opening can give me headaches later on in the hand, because I might find myself in a position where I will be needing a 6 or an 8 to make pairs on the bottom, as well as to complete my middle, but having no information at this time on the live cards, I think it would be too early to abandon my Max Nullo draw and place 5-6-7-8 in the middle.  Moreover, this opening would prevent me to use the 4 or the 9 in the middle, leaving me with only three options (2-3-10) to make a valid Nullo.

As for the “Turbo” format, in which you only have access to 13 cards, that you all have to place within only three draws, I would chose the same opening as in Classic Pineapple variation: 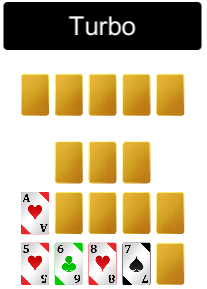 Indeed, it is quite a safe opening, knowing that we still have eight available cards to complete our straight.  At the same time, it is an excellent opening in “Turbo”, because it is very rare to reach Fantasyland in this format, but with such an opening, our chances to get there are greatly amplified!

To conclude, do not forget the famous saying that summarizes very well all the opening questions in Open Face Chinese Poker:
“It’s a game where everybody agrees to disagree!