Hello all and welcome back to the No Mercy OFC little guide!  Now that we rapidly went over the history of the game, its basic rules, some primary recommendations to elevate your game, and a few tricky scenarios, let’s analyse this week a complete hand in OFC Pineapple, so we can cover different points all at once!

This is a hand I played last week in the “No Mercy Ride” tournament on TonyBet Poker.  I started with quite a good draw, and being first to act in this situation, I am always a big fan of placing my Aces in the middle.  In this particular case, I chose to place my 3-5 on the back, hoping to make two pairs or a straight.  A straight would obviously allow me to improve my middle line, but otherwise I would still be all set to go to Fantasyland, should I catch a pair of Kings or Queens on top, while improving my bottom line. 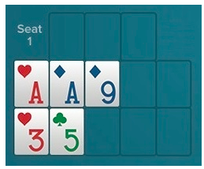 ​My opponent positioned his first five cards, and I was dealt these three cards for my second draw: 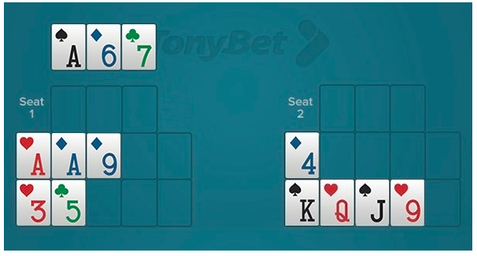 This scenario offers two ways of playing the hand, and I had to make a choice.  First of all, I could place my 6-7 in the bottom, drawing to an inside straight draw to cover my middle line.  What I did not like about it is the fact that if I succeed and make my straight, I could still lose the line against my opponent’s bigger straight.  But more importantly, one of my live 4 is already out on my opponent’s board, so I am drawing to 3 cards only.  This situation reminds me of going all-in in regular poker; you’re no longer in control of this line and are hoping to catch your miracle card!

On the opposite, should I choose to place a 6 or a 7 on the bottom line, I would still be drawing to three 3’s, three 5’s and three live cards for the 6 or the 7.  I am aware of the fact that I have to catch two of those 9 live cards, but that seemed a better play than drawing to an inside straight with only 3 live cards.  Add to that the fact that I really hate to waste an Ace in Pineapple, and going with this play, I have the luxury of placing my Ace on top, putting me in a Fantasyland spot, or at least having an Ace high on the top line as protection.

I went with that play, and decided to place my 6 in the bottom.  Why the 6 instead of the 7?  Well, it looked easier to catch a sole 4 for an open-ended straight draw opening more outs, should that happen, instead of catching both a 4 and a 6, if I had chose to place my 7 in the back.  This decision was also made based on the fact that my two pairs 7 high or 6 high won’t have any effect against my opponent bottom line, since he will either make his straight, or he will end up with only one pair.  However, if he was trying to make some small pairs as well, then I would have placed my 7 in the back, trying to make two higher pairs than him. 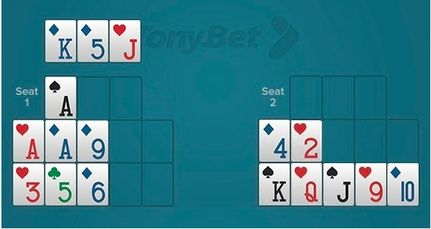 My opponent got his 10 to complete his straight in the back, and I got an easy draw, with the 5 going in the back for my two pairs, and my King going on top to give me another chance to get to Fantasyland!

My opponent paired his deuces in the middle, and placed a 10 on top, while I succeeded in making my two pairs in the back to cover my Aces: 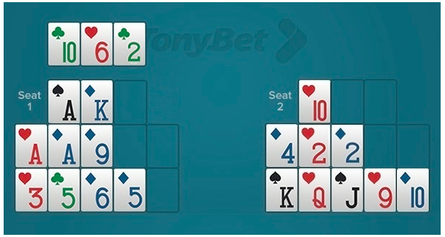 ​Straight away here, my 6 goes in the back for sure, since this was the original plan and I’m happy to cover my Aces with this draw.  As for the other card, there are two 10’s and two Deuces showing already, so my chances of making a second pair in the middle is equivalent for those two cards.  Putting one of those cards on the top line is absolutely out of the question, and I am sure by now you can see why.  After I placed my 10 in the middle, my opponent managed to make two pairs in the middle, and placed a King on top, being also ready to get to Fantasyland.  As for me, I got my miracle King, and definitely made it there! 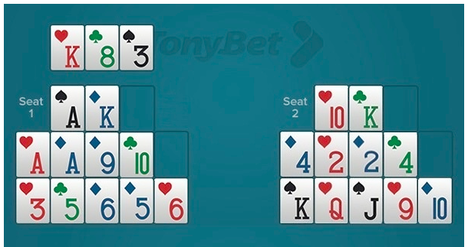 ​This hands shows that I made the right play at the start, by not choosing to draw to the inside straight, because as the cards were dealt, we can see that I would not have catch my miracle 4.  I am not saying this is always the right play, but the fact that one of my live 4 was already dead, coupled with the higher possible straight on the bottom line of my opponent, made me choose that play at that particular moment.  You always have to take into consideration a multiple of factors before you make your mind on the direction you’ll go in OFC. 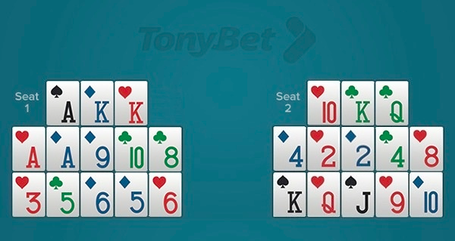 As you can see at the end of the hand, I won only 5 points out of the hand, despite the big risk I took by placing my Aces in the middle to start.  Indeed, my opponent made 2 points Bonus for his straight in the back, plus 1 point for the lines as he is beating my bottom and middle line.  On my side, I made 8 points Bonus for my Kings on top, minus the 3 points of my opponent, which left me with a 5 points win for the hand.  With some experience, I find that the points I win when starting with a pair of Aces in the middle are often small marginal points, and rarely big jackpots, but as you can see here, it often allows me to get to Fantasyland, and with a bit of luck, I can catch a huge hand and crush my opponent, who will be playing open face during that time!