OFC No Mercy Tutorial Part 4: Knowing is the Key
Hello all and welcome back to the No Mercy OFC little guide!  Now that we rapidly went over the history of the game and its basic rules, we will today start to explore more in details the “Pineapple Fantasyland” variation of OFC.  Aside from getting to Fantasyland when placing a pair of Queens or better on the top line, you also have to know that when you are already in Fantasyland, the only ways to stay there will be to make trips on top, or Four of a kind in the middle or in the back.  Otherwise, you can imagine how easy it would be to stay in Fantasyland if the Queens on top were sufficient!  Let me guide you through some primary recommendations to help elevate your game if you are a new player!

Advice #1 – The points and the Bonuses

On my OFC app, I have a few ongoing games with friends who don’t even know how many points they would get by making a Full House on the bottom line!  No wonder I am ahead 800 points against them lol!  They will recognized themselves, especially those who keep insulting me because of my supposedly “luck”!  Before you start playing OFC, you have to look at the points and bonuses and know them by heart.  It might seem obvious to know the rules of the game, but I assure you that there are a lot of recreational players out there who play intuitively, not knowing in the end how many points they will get, and letting the computer do the maths for them.  This is kind of silly and lazy, because according to the points and bonuses that we can make, we will set our cards in different ways… even more when in Fantasyland!  Indeed, in this special configuration, we will often have many possibilities and choices to make.  What options can make us scoop?  Which placement will give me bonuses?  What will make me win more money?  In order to make the best possible decisions, you have to know the points and bonuses…  Let’s look at the following example: 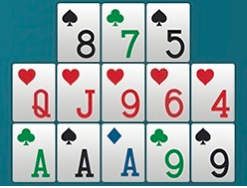 Most of the time, inexperienced players will quickly put their Full House in the back and their Flush in the middle, leaving the crappy cards on top.  In this particular case, the Full House bonus is 6 points, and the Flush in the middle is 8 points, for a total of 14 points in bonuses.  Not bad…  Yet, it seems very unlikely to scoop your opponent with this board, while holding 8 high on top. That being said, let’s go back to the example, but this time we will place the same cards in a different manner: 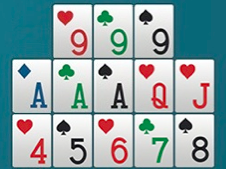 ​In this scenario, the Straight bonus is only 2 points, the trips in the middle is also 2 points, but the bonus for trip 9s on top is 17 points!  That’s a huge difference compared to the first board, as here we get a total of 21 points in bonuses instead of 14…  On top of that, with a hand that strong on every line, there is a real chance to scoop your opponents and win another 6 points on top of your 21!  The goal is not always to make the strongest possible hand, but it certainly is to make as many points as possible!  Making more money, simply because you placed your cards differently, thanks to your knowledge of the points and bonuses!  If you don’t want to learn and memorize the bonuses’ chart, remember at least one easy thing; when you can actually place trips on top, it’s probably the right play.  And it will take you back to Fantasyland!

As you will not be able to move your cards once they are placed, your initial positioning is the absolute foundation of your hand.  It reminds me of classic chess openings, as there are sometimes a few possibilities and sometimes some evident ways to place the first 5 cards.  Whenever I receive an Ace or a King, I’m very much inclined to put this card in the middle, as it is my joker card to easily make a pair of Queens on top.  That being said, if I get one of those card in Diamond, along with 4 other diamond cards, there is a very good chance that I will place my flush in the back, especially if I am last to act and see many more diamonds already out there in my opponents’ hands.  However, if I receive a pair of Kings or a pair of Aces to start the hand, it is unlikely that I will place it on top right away…  And when I get two pairs to start, I will very rarely separate them.  Don’t forget, not giving up points is a big part of this game!  Here are some examples of starting hands that I like to play this way: 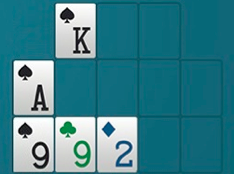 ​In example 1, you’ll have to choose whether to put three cards flush in the back, or separate those three spades in a different manner.  I’m a big fan of this positioning, as it is quite easy to make two pairs in the back, Aces in the middle, and Kings on top.  For sure an Ace high flush in the back is a good hand, but it’s not leaving me with much isn’t it?  I’ll have an ugly 9-2 off suit in the middle, from which a nine is already dead in my back line.   Doesn’t seem like a lot of potential to me… 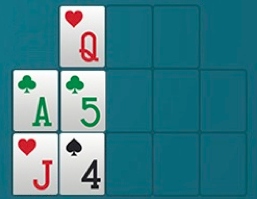 ​In example 2, I’m still looking at my Ace in the middle and my Queen on top, always with the objective of making at least two pairs in the back, and Aces in the middle with Queens on top.  Here, I like to put the 5 of club in the middle, leaving the door open for a Flush in the middle in case I successfully make a Full House in the back.  What justifies my decision, is that the 5, as much as the 4, are both connecting cards to a straight in the middle with the Ace, so no matter which one I choose to place there, it will have no influence on my chances of making this straight eventually. 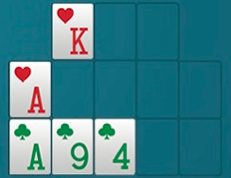 ​Example 3 offers many diverse possibilities…  Of course, all those scenarios are theoretical and observing the cards already out in your opponents’ hands will be absolutely crucial!  But for practical reasons here, let’s assume we are always first to act.  In this particular case, I like to split my Aces (which will be extremely rare), because the Flush seems relatively easy to make, and I’m still aiming for Aces in the middle and Kings on top.  Should I put my King in the middle along with my Ace, knowing one Ace is already dead in my own hand?  I could catch a King in the middle and still make Queens on top…  I don’t know… What do you think about it?
​Open a free account on CoinPoker and start playing OFC right now 😎