​Hello all and welcome back to the No Mercy OFC little guide!  Now that we rapidly went over the history of the game, its basic rules, and some primary recommendations to elevate your game, let’s look this week at some tricky situations that often present themselves in OFC Pineapple!

This situation will happen very often in OFC and will give you a headache every time!  Let’s look at the following example to illustrate the concept: 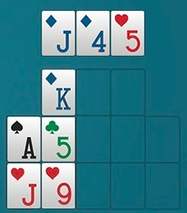 ​This exact play presented itself to me yesterday.  Obviously here, my Jack will go in the back, and instinctively, I’ll tend to put the 5 in the middle, which is the tricky part…  Indeed, my initial game plan was to make at least two pairs in the back, to secure a pair of Aces in the middle and a pair of Kings on top, in order to go to Fantasyland.  Now, when I place my 5 in the middle, I will not be able to hit my Ace and place it there, unless I make at least trip Jacks in the bottom.  This situation will present itself more often than you think, and in order to make the right decision, you’ll carefully have to look at your opponent’s board, to see if, first of all, there are indeed some Aces left in the deck (because if there are none, no need to worry about those two pairs Aces in the middle), and second of all, you’ll have to look for your live cards in the back; the ones that could come along to beat your two pairs in the middle.  Eventually, after looking at the board, I decided to place my 5 in the middle, even though my sole Ace in the middle was already covering my sole King on top, as I thought I could also make two smaller pairs in the middle, or catch my Jack in the back with an Ace in the middle!  Obviously, this was my next draw: 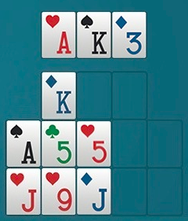 ​Had I not put my 5 in the middle, I was looking good to go to Fantasyland, placing my Ace in the middle and my King on top.  Indeed, knowing that all my Jacks and 9’s were still alive, I would have take that risk with great enthusiasm!!!  However, now that my 5 is positioned in the middle, I am much less incline to try to catch a sole Jack in the back, so I had to compromise and go for a conservative move, placing my Ace on top, securing my Ace-King there, and my 3 in the middle, hoping to make two pairs in the back, two smaller pairs in the middle, and still be in a position to go to Fantasyland if all that happened while I catch another Ace or King!  Eventually, in that precise hand, I did catch a 9 and would have been able to go to Fantasyland, had I not place my 5 in the middle on the second draw…  Just like in Hold’em or other poker variations, it’s always easier to analyse a play after the hand if finished and looking at the ultimate results, but that doe’s not mean that it wasn’t the right play to place the 5 in the middle!  It only means that in those special cases, you’ll have to be more observant than usual, and look at your live cards and opponent’s board before you make your mind! 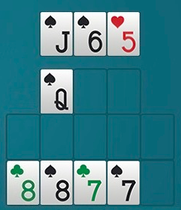 ​Amateurs have a quick tendency to always use their bigger cards and will place the Jack and the 6 in the middle.   I’ll admit, a pair of Jacks is stronger than a pair of 5s or 6s.  However, if you look at the big picture, what will you do if you catch your Jack on the next draw?  You’ll put it in the middle for sure, completing your Pair of Jacks, but that will prevent you from making two pairs there, unless you fill your back to make a Full house!  Therefore, in that particular case, I’ll prefer to go with the 5 and the 6 in the middle, so I could still make two pairs that would be smaller than my two pairs in the back, without having to make the Full House, and still leaving me in good shape to get to Fantasyland.  And if I do make my Full in the back, my 5 and 6 are also connecting cards, so I could eventually make a straight in the middle.  Obviously and as always, your live cards will be highly important in these kinds of situations.

This brings me to my last point regarding these “Two Pairs” cases, which is about the start of the hand, when you are dealt two pairs already.  Let’s look at the following draw, would you place your cards this way to start the hand? 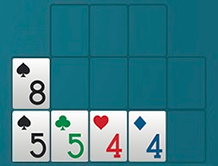 ​A lot of players will do it, hoping to make a Full House in the back.  Personally, for the reasons we just exposed and since my two pairs in the back are so small, I will prefer to split them here and place my 8-5-5 in the back, with my pair of 4s on the middle.  That is assuming I am first to speak, and have no information about my live cards, because if I don’t complete my Full House in the back, I will not be able to make two pairs in the middle, unless I catch a miraculous pair of 2s along with a pair 3s to fill the middle!  As a general rule, I’d say that it’s usually the correct play to split two pairs lower than 7s in the back, but then again, it always depends on various factors, like your live cards and the playing style of your opponents!