Hello all and welcome to the No Mercy OFC little guide!  Now that we rapidly went over the history of the game and its basic rules, let’s continue with some primary recommendations to elevate your game in OFC Pineapple!

As we rapidly covered last week, the initial placement of your cards will be the whole foundation of your OFC poker hand.  Therefore, this first setting will be one of the most important decisions you’ll take in an OFC hand.  Sometimes the cards will speak for themselves, but often you’ll have more than one option to position the cards.  This is where your knowledge of your opponent will come into play.  Methodically observe how he decides to place his first 5 cards, ask yourself if you would have done the same, and remember his basic tendencies of play.  What does he do when he receives a pair of Queens to start?  Does he systematically place it on top, risking fouling, or does he play more conservatively and prudently?  Against certain players, you’ll rarely have to take some big risks, and against others, it will be the opposite.  In the end, despite the fact that the placement of your first 5 cards is sometimes dictated, it is precisely in cases where you’ll have more than one option that this placement will be oriented by the knowledge you have of your opponent.  When you’re first to speak, you’ll have absolutely zero information about live cards or counter attack, so it is this awareness of your opponent’s tendencies that will help you “guess” the best strategy of play.  Adapt to everyone!

The concept of Live Cards is absolutely primordial in OFC poker, especially if you are playing against more than one opponent, where you’ll have access to a lot of visible cards.  Your “Live Cards” are the ones you still didn’t see in your own hand, or in the hands of your opponents.  Look at this example: 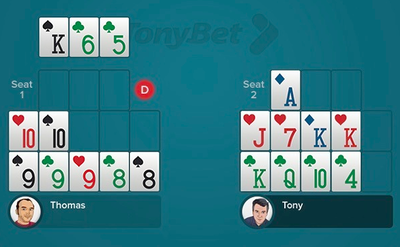 ​The first impulse that amateurs usually have is to place their biggest cards on the board, meaning the King and the 6 in the middle here.  The problem is, one of these two cards is completely dead, so there is no way in the world you will pair your King here in the middle, as 3 Kings are already showing in your opponent’s hand.  Placing it on top will do you no good either, as your opponent is already showing an Ace there.  However, the 6’s and the 5’s are completely live, so you’ll have a much better chance at making two pairs in the middle if you use those two cards there, instead of a sole King.  Always observe your opponent’s board, and place your cards according to your live cards!

This advice may sound as silly as “Know the points and Bonuses”, but trust me, too often we tend to play too fast, inevitably making some mistakes in the process.  You’ll have some time allowed to play your hand, so use it wisely and double-check your board before clicking or discarding your last cards.  I have made in the past a straight flush in the middle, obviously not beaten my “regular” Ace high flush in the back, and busted out of the hand by my own fault.  This is a grotesque example, but let’s take a look a little deeper with the following hand: 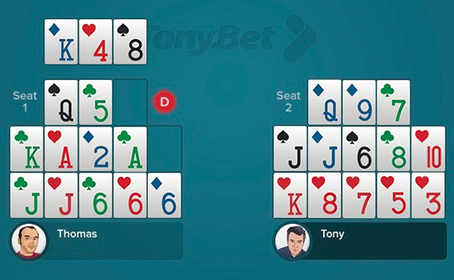 ​Instinctively, players tend to quickly try to make the best hand possible, by placing the King in the middle to make two pairs, leaving the “garbage 8” on top.  Well, in this particular case, if you look more closely, the King in the middle will do no good for you, as your pair of Aces is already beating your opponent’s pair of Jacks in the middle, and two pairs won’t give you any bonus for that line.  Plus, your Q85 on top will be beaten by your opponent’s Q97.  However, placing this King on top instead of in the middle will make you win both of those lines.  In the end, instead of losing one line as you would by placing the King in the middle, you will actually Scoop your opponent by placing it on top!  This is a big difference, as when you lose the top line, you’ll get 6 points bonus for your Full, plus 1 point for the lines, minus the 4 points of your opponent for his Flush, for a total of 3 points in your favour.  Whereas when you place the King on top, you’ll get 6 points for your Full, plus 3 points for the lines, and another 3 points for the Scoop, minus the 4 points of your opponent for his Flush, for a big total of 8 points instead of 3!  When you’re playing 100€ per point, that’s a difference of 500€ in your pocket, so this is definitely the right way to play this hand.  Remember to take your time, analyse the boards of your opponents, and do not forget that the goal is not always to make the best possible hand on each line, but to take a maximum of points!